Audiovisual facilities in Utrecht and Apeldoorn

The most special places were converted into stadiums. For example, there was a stadium for the SS Rotterdam in Rotterdam, at the Zuiderpark Sports Campus in The Hague, on the Marktplein in Apeldoorn and on the Neude in Utrecht. With over 2,000 seats, all stadiums were sold out. 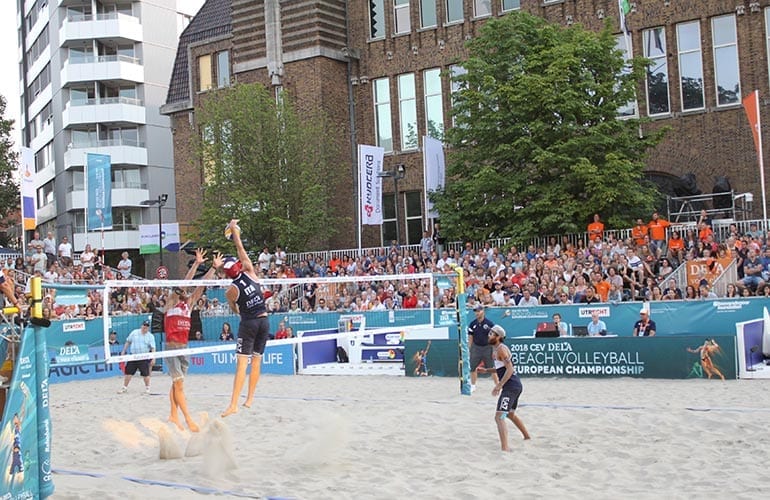 A total of 64 teams played; 32 men’s teams and 32 women’s teams. These teams were divided into eight groups of four. The two best teams from each group played in the knockout phase. The semifinals and finals took place in The Hague. The winners of the 2018 European Beach Volleyball Championship were the men Mol, A. and Sørum, C. from Norway and for the women our own Dutch Emperor and Meppelink.

We have already been able to provide the technology during special sporting events, such as the Hockey World Cup, the Beach Volley European Championship, the Tour de France, the Giro d’Italia, the Archery World Cup and the Medemblik Regatta. In 2020 we will be enlisted for the start of Vuelta 2020.

Heuvelman was allowed to provide sound reinforcement for the stadiums for two of the four playing cities and LED screens and audio amplification were on the fan square in Utrecht and Apeldoorn.

"During the DELA EK Beach Volleyball, Heuvelman was allowed to provide the audiovisual facilities in both Utrecht and Apeldoorn."

The proud partner of