Administration is human work: theme of the VNG Annual Congress 2019

Each year the VNG organises a conference for its members. This year’s edition focused on the theme ‘administration is human work’, with the aim of putting the human side of this meaningful profession in the spotlight. 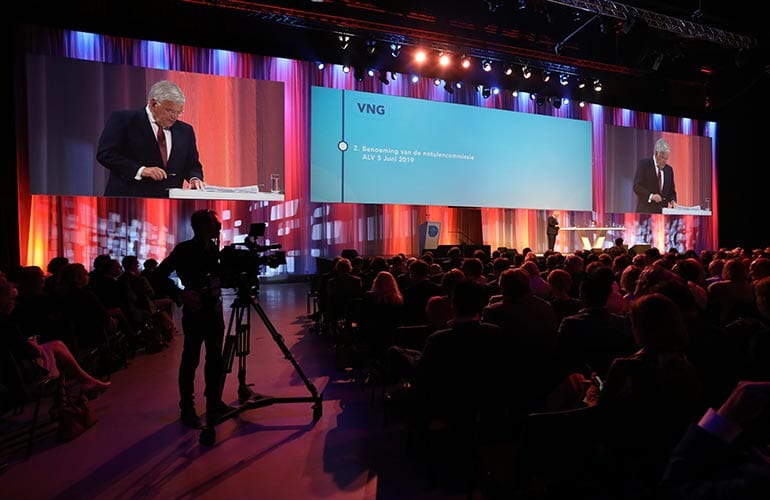 Barneveld on the map

This year the event was hosted by the municipality of Barneveld in the Midden Nederland Hallen. This enormous location had to accommodate 2,600 local administrators during the two congress days. Barneveld municipality thought it was particularly nice to be able to put the city on the map in this way. The mayor of Barneveld, Asje van Dijk, was delighted to welcome the huge delegation to his municipality and welcomed everyone.

Actor Gijs Scholten opened the annual congress by quoting from the work of William Shakespeare. Mayor van Dijk then entered the stage to give the participants a warm welcome and discussed the theme of this year. VNG chairman, and also mayor of the municipality of Utrecht, Jan van Zanen subsequently took over.

Partner of this national event

For the seventh year in a row Heuvelman was the producer of the Jaarcongres. As a result, we were not only responsible for the audiovisual technology, but also for the overall layout of the location. For example, for the plenary presentation we supplied a 30 m wide widescreen, spread over 3 screens. The content was laid out in such a way that these 3 screens formed a total of 1 joint image.

The room in Barneveld could hardly handle the enormous amount of interested parties. To avoid people from not being able to follow the program in the hall, the program was also broadcast on screens outside the hall. On the 2nd congress day we provided a live stream of the President’s Annual Speech, the minister’s speech, and the General Members’ Meeting. These parts were broadcast live on twitter.

Our content designers were invited again this year to design the most beautiful visuals for the plenary section. The visitors were included in the speakers’ stories, which were strengthened by our visual material.

For example, the VNG uses our full range of event services every year, with the advantage that they only have one point of contact.