At the end of September 2019, game developers, code writers, animators and programmers from all over the world gathered in Copenhagen. Unity, a cross-platform game engine, organised the 2019 edition of the popular event ‘Unite’ here. An event where creativity and technology converge. During Unite 2019, the community of Unity was informed about the progress of the company and the latest developments, ideas and products was presented.

Enthusiasts and professional game developers alike come to learn, network and actively participate during this event at the futuristic-looking Bella Center in Copenhagen, Denmark. In addition to the break-out presentations and gatherings such as ‘Unite at Night’, the four-day event consists of a well-attended keynote presentation. 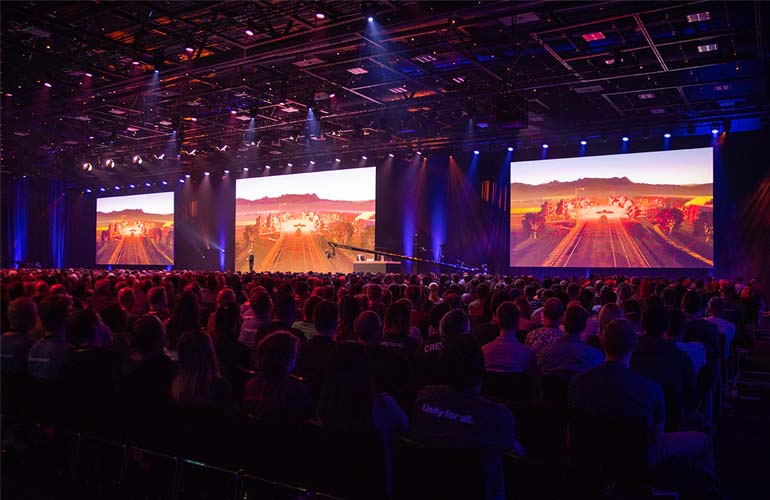 During the keynote, those present received an exclusive glimpse into the world of Unity. The audience was visibly enthusiastic about the many announcements that were made. The event was opened by the CEO of Unity, John Riccitiello, who gave a welcome speech and short introduction. After this, the stage was stormed by Timoni West, Director of XR, Lucas Meijer, Technical Director, and Joachim Ante, Chief Technical Officer. The public enjoyed a preview of ‘The Heretic’, a short movie that is being further developed. And they were enthusiastic about the restyle of the Unity Editor, real-time 3D, MARS updates and the real-time adaptation of a game without a reboot.

From IJsselstein to Copenhagen

Heuvelman brought most of the materials from our headquarters in IJsselstein to the location in Copenhagen. Two completely loaded trailers, filled with various audiovisual products, were driven to Copenhagen. After two days of construction, all break-out rooms and the keynote session were ready and ready for rehearsal.

Unite 2019 was the ultimate opportunity to use our latest LED solution. This Diamond 2.6 is very high in its class and is easy to install due to its light weight. The content of Unity was immensely beautiful to the public with these new tiles.

Heuvelman was responsible for the total technical production for both the Keynote session for 2,000 visitors as well as for the five break-out rooms in which the total of 120 presentations were centrally recorded and edited by Heuvelman so that they could be posted on YouTube, Twitch , Facebook and other social media channels.

Heuvelman takes the entire technical production off your hands and thereby relieves the organisation. This allowed the organisation to focus on the very extensive program.
In addition to the LED wall, four plenary 40,000 ansi-lumen 4K laser projectors and a 5-camera control with two 9-metre cranes were used for the plenary room to show all content perfectly, both in the room as on the live stream.

Elspeth Lawson, Global Event Manager at Unity, said the following about the collaboration: “We are super pleased how smooth everything ran and it’s so easy to work with you guys it makes my life easier! I never have any concerns and I know you have us covered. You are all true professionals! ”

"I never have any concerns and I know you have us covered. You are all true professionals!"