The Academic Celebration of the Year

After completing the academic year, more than 1,300 graduates received their diploma during MomenTUm: The Academic Celebration of the Year. In collaboration with Artishock and the Eindhoven University of Technology, a wonderful moment was created. From the awarding of the diplomas, the throwing of the graduation caps, to the dance party that lasted until late in the evening.

The graduates received their diploma during the carefully prepared ceremony. Everyone had a moment to shine on the stage, while they were accompanied to the main stage with banners, music and very impressive visuals. 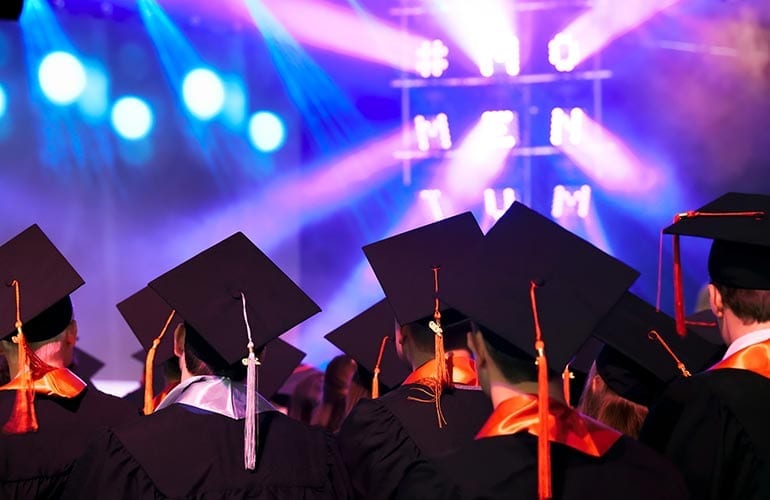 Not only the graduates were put in the spotlight. Two teachers received the ‘best teacher award’ and a check worth € 20,000. Four academic prizes were also awarded. For all parts of the ceremony our content design team had prepared exceptionally beautiful visuals, specially made for MomenTUm.

At the end of the official ceremony, the successful students received some great advice: ‘continue to learn’, followed by a loud applause and the throwing of the graduation caps.

Heuvelman was partly responsible for the audiovisual interpretation of the event. For example, Heuvelman supplied 18 screens so that the ceremony could be viewed well throughout the audience and we supplied six large LED screens for the stage.

In addition, the entire event was captured by the three cameras that Heuvelman had facilitated. The image shot by these cameras was immediately played on the screens in the room. Due to the enormous interest of the event, not everyone had a perfect view of the stage, but thanks to the 18 screens supplied, everyone could ideally enjoy this, for many, special moment.

"Due to the enormous interest in the event, not everyone had a perfect view of the stage but the 18 screens supplied meant that everyone could perfectly enjoy what was for many a special moment"