In mid 2019, the Keukenhof in Lisse was officially opened for the 70th time. Each year the entire park is dominated by a theme. This year the unique theme was Flower Power. The stage was completely decorated in theme and came to life through the lighting provided by Heuvelman. 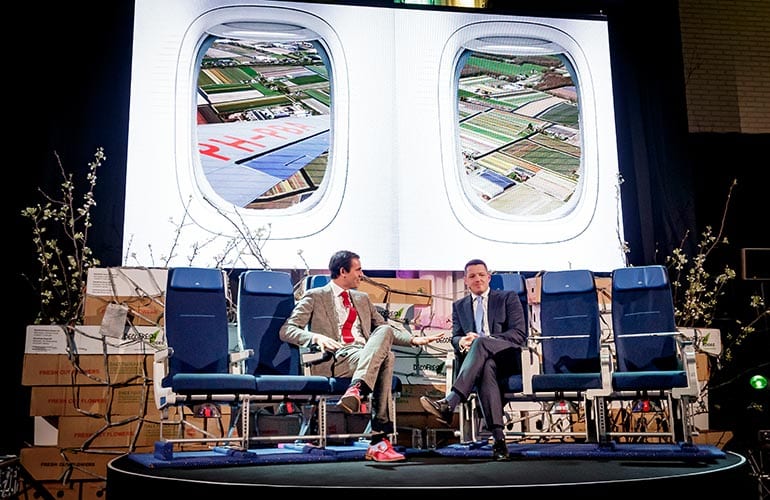 The evening was musically opened by a finalist of The Voice Nederland, Patricia van Haastrecht. Together with Bariton Hans van Heiningen they sang the song Aquarius by The Fifth Dimension, which was released in 1969. This spectacular performance immediately set the tone for the evening and the audience was burning with anticipation.

Director Bart Siemerink introduced the evening and addressed the audience. Not only did he mention the successes that Keukenhof achieved in the past year but he also revealed the new challenge: a concert at the Keukenhof. As a foretaste, Karin Bloemen entered the stage and swept up the audience with her serenade.

“Keukenhof has been opened!”

Pieter Elbers officially opened the park with the diretor of the Keukenhof. With a push of the red button the music started and multi-coloured confetti was blown into the room. A group of dancers entered the stage to add extra power to the opening. The very festive event was cheered on by the public.

Just as in previous years, Heuvelman provided the complete audiovisual interpretation of the event. Heuvelman was not only responsible for the sound installation, the light and LED displays but also for the camera work and camera registration. As the event was attended by English-speaking guests, Heuvelman had arranged translation and headsets. In this way, we completely relieved Keukenhof in the area of technology.

Zdenka Fieggen, event manager at Keukenhof, said the following about the collaboration: “De Keukenhof was officially opened yesterday with a creative Romantic program in a beautifully designed setting. Audio-visual partner Heuvelman was largely responsible for this. In the preliminary phase, they offered ideas for the appearance of the space and they unburdened us on every audiovisual level by, for example, by developing image and audio content and making agreements with the set designer. Just before and during the event, they were available with a team for the latest adjustments and improvements. For the seventh year in a row they have provided our Kick Off for staff (900 guests) and Official Opening (500 guests). And they do this with the same familiar faces that form a top team that I have 100% confidence in!”

"Heuvelman thinks along with you about the appearance of the room and unburden it on every audiovisual level for example, developing image and audio content"

- Zdenka Fieggen, event manager at Keukenhof
Share this case on
View all cases